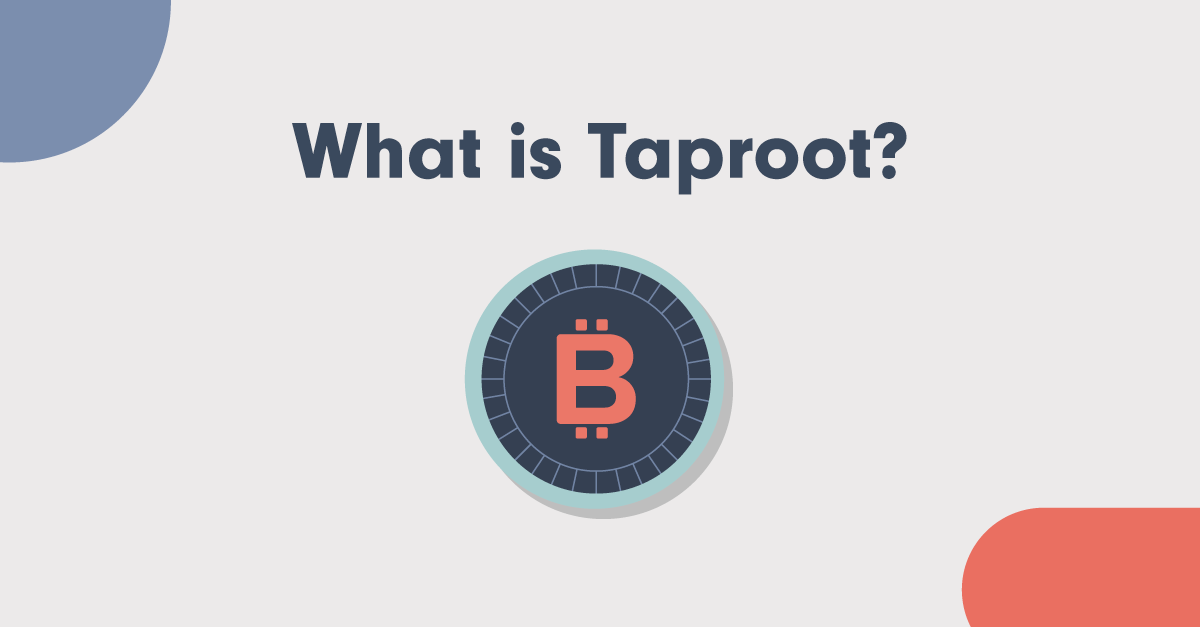 What does Taproot mean for enterprise business?

How does Taproot work?

Taproot is the most recent Bitcoin update that includes major changes that will redefine multiple spending rules, signature algorithms, and scalability of the entire Bitcoin network.

In other words, with Taproot widely adopted, the Bitcoin blockchain and its Layer 2 solutions become cheaper, faster, and more privacy friendly.

What does Taproot mean for enterprise business?

This makes it much harder to conduct a privacy-compromising analysis and gives enterprise business a level of anonymity on the blockchain.

Since the new signature algorithm derives a single key out of ‘n’ number of keys, it reduces the overall data size.

The successful implementation of new spending rules means less data is embedded in each transaction, which in turn, trims down fees.

How does Taproot work?

Schnorr Signatures effectively hide the public keys of all individuals or business entities that are involved in a transaction.

Before Taproot, when a multi-signature transaction had been completed, it was possible for individual/business key account holders to be identified through pattern analysis. 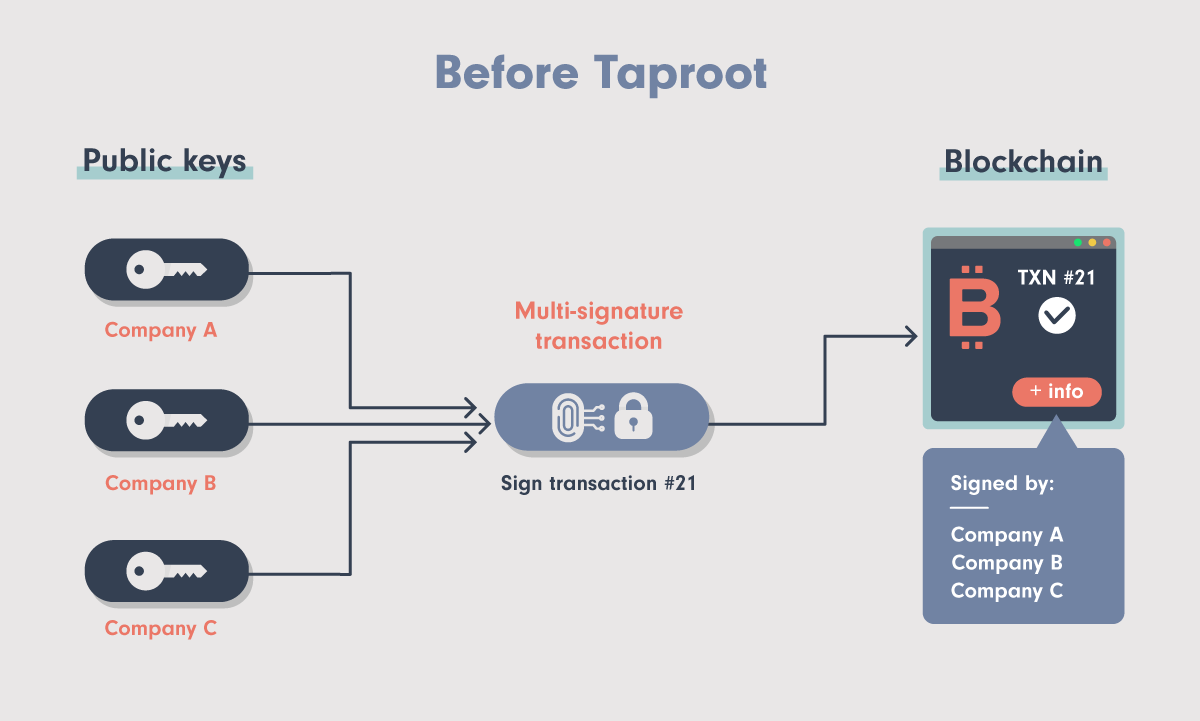 After Taproot, all key account holders who sign a multi-signature transaction are aggregated into one signature and only that aggregated signature is public on the blockchain. 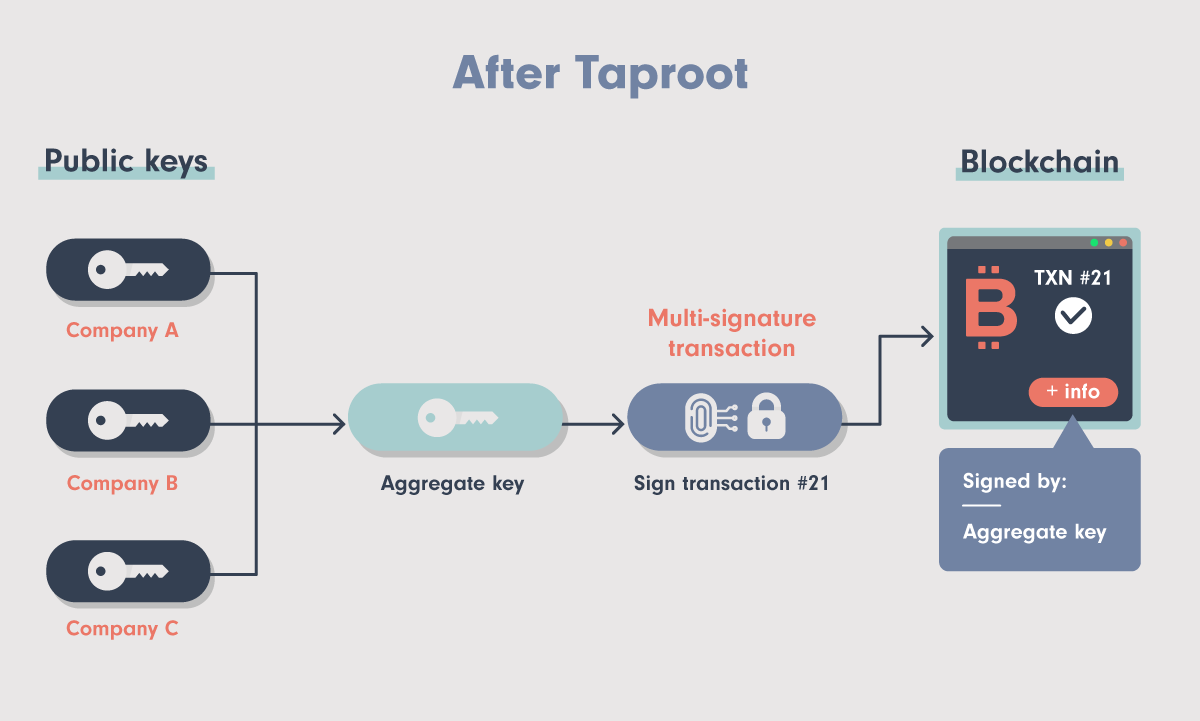 The previous state (before Taproot) not only adds more data to an already congested network, but it is also exposed potentially sensitive information about the agreement and accounts associated with a transaction.

However, the Taproot update changes these spending rules, which will eventually mitigate these privacy issues.

As explained in the proposal, “Taproot improves the privacy of Bitcoin because instead of revealing all possible conditions for spending an output, only the satisfied spending condition has to be published.”

This breakthrough allows the implementation of complex conditions from multiple signees while omitting any of the included data from the public eye.

With Taproot, it is no longer required by the protocol to reveal all the data of the executed transaction as was previously the case. This means running a full node becomes less resource-intensive because there is less information that needs to be processed.

At the same time, the Schnorr algorithm is simpler than its predecessor ECDSA and takes less time to verify a transaction.

What makes this possible is the fact that it uses the minimum amount of information needed by the blockchain. By simply using less data, we are cutting down the fees. The reduction in data weight consequently enables more transactions to be added to a single block.

When Taproot is adopted globally, the Bitcoin blockchain will inevitably gain new momentum.

With this upgrade now live, Bitcoin becomes an ecosystem that will provide improved privacy, increased transaction speeds, reduction in fees, and optimization of several critical components of the network.

The Taproot upgrade opens the door for further innovations not only in the legacy chain but also in layer two scaling solutions built on top of the Bitcoin blockchain.